‘The further a society drifts from truth, the more it will hate those that speak it’.

George Orwell’s pronouncement above is very much on the minds of director Agnieszka Holland and screenwriter Andrea Chalupa in Mr. Jones. While the biopic takes us back to the mid-1930s, when Welsh journalist Gareth Jones (James Norton) risked his reputation and life to expose the man-made famines (the Holodomor) in Soviet-occupied Ukraine, Holland and Chalupa utilise this obscure(d) part of 20th Century history to raise an alarm about truth-telling in our present.

After his prescient reports on Hitler’s threat to Europe are scoffed at by the British political elite and he’s cut from the Foreign Office, Jones becomes determined to discover the source of Stalin’s economic ‘miracle’.  Spending a few days as a ‘freelance’ journalist in Moscow, he discovers a gilded cage of Party apparatchiks, unquestioned state orthodoxies and bugged offices.

Against the advice of obsequious New York Times Moscow Bureau Chief Walter Duranty (Peter Sarsgaard) and his frightened colleague Ada Brooks (Vanessa Kirby), Jones goes off the beaten track into the wintry wasteland of Ukraine to search for answers. Jones discovers there’s not only danger in finding the truth, but speaking out on it.

Holland and Chalupa clearly want this story to resonate in this current political moment of ‘fake news’, ‘alternative facts’ and demagogic attacks on the free press- a quiet, probing exchange between Norton and Kirby on Truth versus truths is particularly pointed. Yet, Mr. Jones struggles to get its actual story out. Despite the extremely harrowing depiction of the Stalinist atrocities, this is a rather bland and disjointed biopic.

With Jones written as a paragon of moral integrity from the start, the narrative proceeds rather predictably- gliding quickly along the surface-level of Jones’ most famous scoop. As Jones’ actual descendants have remarked, the attempt to cover the cruelty of the famine by having the man traipse and experience all its horrors (chewing bark, cannibalism in a frozen land of grey, emaciated ‘zombie’ kids) turns Jones himself into ‘a victim, rather than a witness’.

To compensate for a lack of depicting Jones’ actual journalistic skills, Holland frames this account with shots of Orwell (a shifty, pensive Joseph Malwe) typing up Animal Farm. It relies on the fairy-story’s most quoted lines (‘Looking from man to pig…etc’) to give these earlier historical events some resonance.

While adorned in lavish period production design, cinematographer Tomasz Naumiuk’s off-kilter, hand-held camerawork also doesn’t fully achieve the desired effect (suggesting a manipulated focus in an ambivalent or paranoid world, perhaps?) A later sequence is so erratic that not only does it completely rob the moment of its dramatic weight, but turns Jones into the world’s-fastest-cyclist. 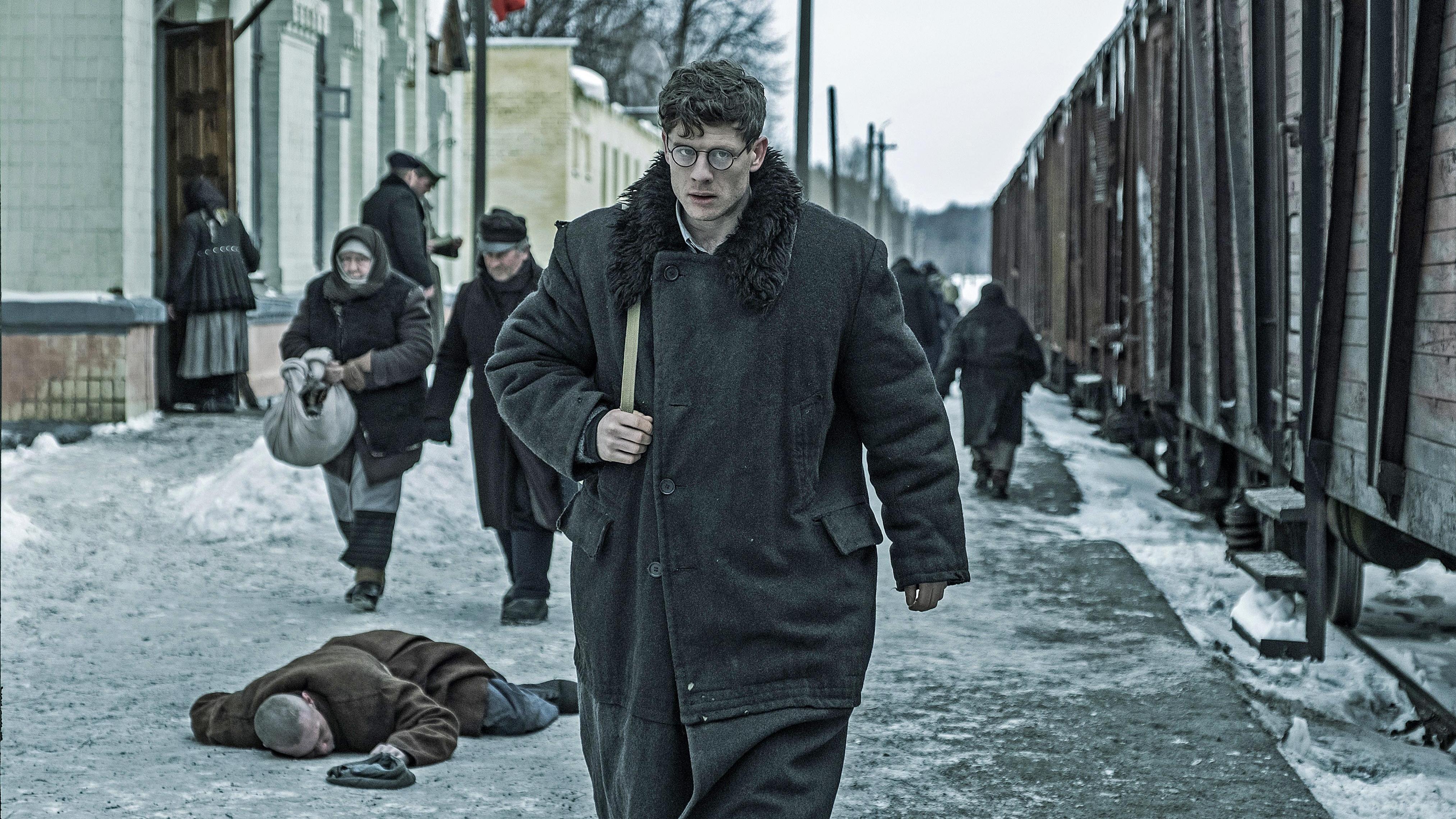 Regardless, Norton gives an impressive lead performance as Jones, enduring horrifying hardship in the Ukrainian desolation. He delivers on the modest cleverness of the be-speckled crusader. Sarsgaard suitably provides the opposite- giving his physically and morally crippled stenographer a slimy, unsubtle menace. It’s left to a brief performance from Kirby- all wide-eyed, stilted posture- to flit between them, leaving us to guess which side she’ll land. It’s only a weak script that lets these decent performances down (such as a truly giggle-worthy moment of an emotionally-wrecked, marginalised Jones being mocked by a group of horrible English children)

In our turbulent times, Holland and Chalupa’s warning resonates for the shaken political centre-ground. They make it clear that silence, evasion or tolerance of those who seek to relativize or outright manipulate truth need to be resisted (though one should note that the director and screenwriter have played fast and loose with the truth of Jones’ story and Orwell’s political outlook on Stalinism). Despite the topicality and raising recognition of a significant, brave journalist, it’s a pity that this biopic left me cold.